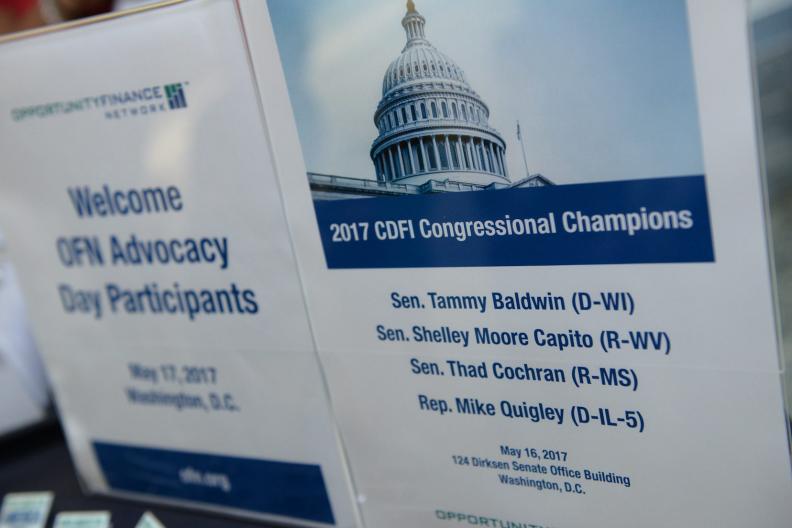 We kicked-off OFN’s 2017 Advocacy Day with a lovely reception to honor four CDFI Congressional Champions—Senators Tammy Baldwin (D-WI), Shelley Moore Capito (R-WV), and Thad Cochran (R-MS), and Representative Mike Quigley (D-IL-5). All are committed advocates for CDFIs. Below we captured a few highlights from the evening.

Honorary Mike Espy, former secretary of US Department of Agriculture and onetime Mississippi Congressman, presented the award to his friend Senator Thad Cochran: “We have a small state in population but large in leadership. No star shines more brightly than Thad Cochran.”

"I will keep this award conspicuously displayed in my office to remind all of us that the CDFI industry and I are friends," said Senator Cochran.

Introducing Representative Quigley was Joe Neri, president and CEO of IFF. Quigley said of the Chicago Congressman, "Representative Quigley is a reformer and a doer. He's a practical problem solver who believes in fiscal responsibility. He cares about communities and looking out for consumers and small businesses. These are the values that we share. He is a good friend of IFF and all CDFIs."

Said Quigley, "Despite the president's proposed budget, there is bipartisan support for CDFIs. For the cost of less than $0.80 a year per person, the CDFI Fund programs help millions across the U.S.… Thank you, CDFIs, for your work."

Salli Martyniak, President, Forward Community Investments, introduced Senator Baldwin, saying: "I've known Senator Baldwin for many years. She's a spokesperson for causes that are near and dear to CDFI hearts."

Senator Baldwin said, "The skinny budget was a shocker to a lot of us… We know what [zeroing out the CDFI Fund] will mean to our neighbors and communities and loved ones. We are preparing to fight, and we know that legions across the country are also preparing to fight. Don't stop advocating and don't get disheartened!"

Presenting the award to Senator Capito was Natural Capital Investment Fund President Marten Jenkins. He said, "Senator Capito is a champion. She spurs innovation and entrepreneurship in underserved communities. She has demonstrated leadership in supporting the CDFI Fund... Sentator Capito and her staff have long served the state of West Virginia and have become good friends of ours."

Accepting the award for the senator was her legislative assistant JT Jezierski, who said: "Senator Capito truly believes in CDFIs and this award. There are not many events in Washington where you have bicameral and bipartisan support. You should be impressed by that. What has happened in West Virginia [in recent decades] has been devastating. The work that you’re doing is helping us and is going to help us. Thank you on behalf of Senator Capito." 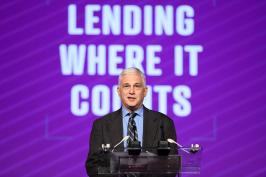