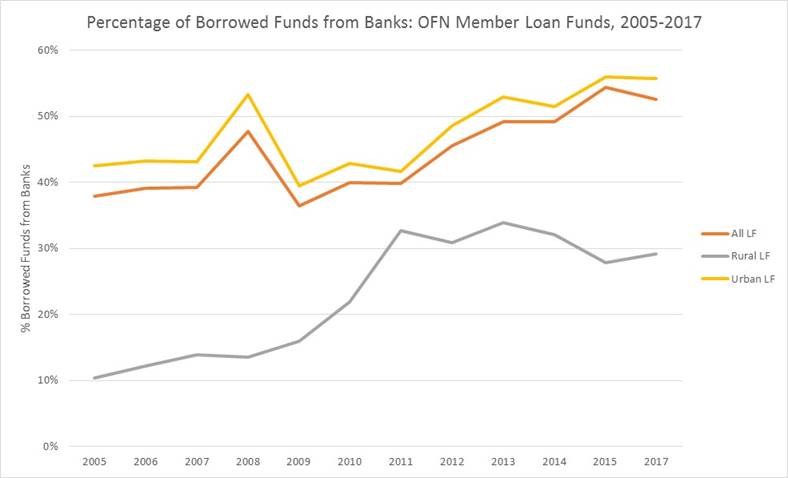 Community Reinvestment Act (CRA) regulations haven’t been updated since 1995. At the time, stakeholders agreed to revisit regulations again in 2000. It didn’t happen then, but it is happening now. This past fall, 18 years after that 2000 revisit was promised, the Office of the Comptroller of the Currency launched a process to begin modernizing CRA’s regulatory framework. OFN has been actively engaged in the modernization debate, working with our members and other CDFI stakeholders to help shape a modernized CRA that retains a focus on underserved communities.

Lisa conveyed the important role CDFIs play in deploying CRA capital to LMI people and places. She pointed out that while CRA has been successful, it needs to be scaled up to better meet the needs of LMI communities. Lisa commented that OFN is recommending changes to CRA that will substantially increase capital flows from banks to LMI people and places.

Panelists discussed how the CRA’s focus on geographic assessment areas disadvantaged rural communities in attracting CRA-motivated loans and investments. Bank examiners focus on a bank’s CRA activity in its largest markets which rarely include rural areas or even small cities. Lisa shared data from OFN’s membership which illustrates this point. OFN members have $3.2 billion in borrowed capital from banks, comprising 29% of total borrowed funds for rural CDFIs and 56% for urban CDFIs (see chart). This $3.2 billion in borrowed funds supports $14.6 billion in outstanding financing to underserved borrowers and communities.

Lisa recommended that bank loans to CDFIs be given the same CRA consideration as those made to Minority Depository Institutions and Low-Income Credit Unions. Panelists concurred with another OFN proposal that bank loans to CDFIs receive CRA credit for each year outstanding as opposed to only the year of origination. And all panelists rejected the single metric concept, whereby a bank’s CRA rating would be calculated based on the fraction of a bank’s total assets that are invested in community development.

Panelists discussed the need for a public database to include CRA lending activity by assessment area to make it easier to analyze the scope and impact of CRA-motivated bank loans and investments. Because CRA banks already submit loan-level data to bank examiners, creating a loan-level database should not be overly burdensome. A national database would illustrate the program’s full geographic extent and identify underserved LMI communities that are not benefiting from CRA lending, whether inside or outside an assessment area.

Numerous other insightful points were made by panel experts. To view/hear the entire discussion, click here.

During the panel’s closing statements, Benson “Buzz” Roberts, President and CEO of the National Association of Affordable Housing Lenders, said CRA is the “oxygen of community development.” Well said, Buzz.

Weigh in on the Future of the Community Reinvestment Act