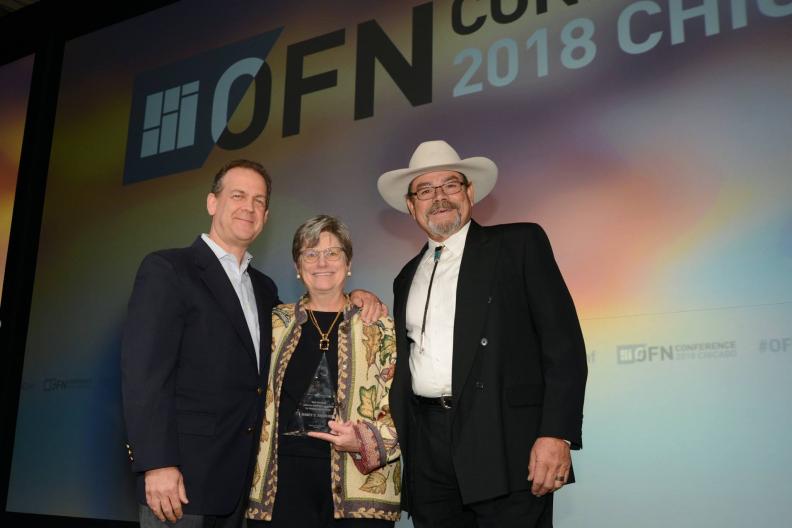 Nancy O. Andrews, a revered community development leader for more than 40 years, has been named the recipient of the 2018 Ned Gramlich Lifetime Achievement Award for Responsible Finance. The annual Award is inspired by Former Federal Reserve Governor Ned Gramlich and is the highest individual honor in the CDFI industry. At the OFN Conference, Andrews accepted the award with a promise of more to come.

Before the OFN Conference, CDFI Connect sat down with Andrews to talk about the impact she has made, and what's next. Most recently, Andrews was President and Chief Executive Officer of Low Income Investment Fund (LIIF), a CDFI committed to alleviating poverty and helping families attain economic self-sufficiency. She retired from LIIF in 2018. Under her leadership, LIIF grew from a $35 million to a $1 billion organization and expanded its focus from solely affordable housing to incorporate a range of community supports, including schools, early care and education, and health and transit-oriented development.

Before LIIF, Andrews was Chief Financial Officer of the International Water Management Institute, a World Bank-supported development organization. Prior to that she was Deputy Director of the Ford Foundation’s Office of Program Related Investments.

CDFI Connect spoke with Nancy about some of the highlights of her career and what’s next.

Congratulations on receiving the Award.

Thank you! It’s a huge honor. I can't think of anything that makes me happier than getting recognition from people in an industry that I've dedicated myself to for the past 30 or 40 years.

Looking back over the past 30 years, what are you most proud of?

I’m most proud of how our field has taken off. Back in the late 80s, when I was at the Ford Foundation, I made what may have been the very first grant ever to National Community Capital Association (NCCA) [now OFN]. It was for $60,000, which seemed enormous. Because I was recommending a relatively big grant for a then small field, I had to present to the Foundation Officers. I had to demonstrate the importance of this nascent community capital movement and how it really had the chance to make an impact. I remember saying “there are 12 of these organizations across the country and they have $25 million of capital under management.”

Fast-forward to today and there are more than 1,000 CDFIs with billions of dollars under management. The field has created a federal program for itself, has created the New Markets Tax Credit program and the Capital Magnet Fund. We have leveraged private sector capital in ways that no one ever imagined.

All those things make me feel very proud of how far the field has come. Helping it along has been the greatest privilege of my career.

Can you remember a moment when you realized the power of LIIF’s vision?

I remember visiting a child care facility with LIIF’s Board years ago. We’d recognized early on how important early learning and child investment is to community building and community development. Our Board Chair, Nic Retsinas, and the other members of the Board were very moved by what they saw. They understood how important it is that kids be given the chance to live up to their full potential and how important it is for community developers to include this in their work. Our Chair spoke to this directly. He told us he knew that we had moved mountains to make this possible – that this was extraordinary work. But, he said, this shouldn’t HAVE to be extraordinary—for all kids to have an equal chance to give their full should be ordinary, not extraordinary. And that our challenge was to make the extraordinary ordinary.

For me, in a way, this moment signified a jumping off point for the field. Today, so many community development organizations are embracing early childhood and youth development. Those kinds of investments and connections are now second nature to almost everyone in the field, but back then it was extraordinary.

I was on the OFN board when it was NCCA. OFN president and CEO at the time Mark Pinsky had a vision of bring $1 billion dollars into the field. The board argued over whether this was feasible or unrealistic. I look back and we got to $1 billion so quickly.

Getting to this point is one marker. Another is funding for the CDFI Fund. Over the years, the CDFI Fund was zeroed out so many times, and every single time the industry rallied and defended it. We’ve kept it alive and now it's embraced on both sides of the aisle.

One of the other big moments was the New Markets Tax Credit (NMTC) program. So many CDFIs organized — Bill Bynum and Ron Phillips were instrumental — to get the NMTC legislation passed. It has been hugely important to our field.

In terms of challenges, I said many times that our field is one that is built on reversals. Many times in my career there have been dark days, when it seemed like CDFIs would be shut down or zeroed out. But every time there was a threat, we've rallied. We believe so strongly in our mission, in our larger purpose, that every reversal of fortune has prompted us come up with another way of getting to the same place. For example, the 2008 financial crisis led us to the creation of the Capital Magnet Fund.

What role has partnership played in the growth of the field?

The partnerships with the banking sector have been vital to our field. It’s undergirded by the Community Reinvestment Act. At the beginning, the relationship between banks and CDFIs was forced by policy, but, over time it has become very genuine. CDFIs are an accepted outlet for bank capital and a go-to partner for getting into markets banks couldn't get into or doing loans that banks otherwise wouldn’t do.

Flexible bank capital and some breaks on interest rates allowed us to leverage the grants that we received from the CDFI Fund. This is the reason the industry has thrived as we have. We can’t diminish the role of the public sector. CDFIs are truly at that nexus between public and private, and we've done a great job of keeping both players in our corner.

What was your favorite part of the job at LIIF?

There were three things that I loved. First, I loved watching the staff come into their own. Over the years, I've really seen the staff emerge as a driving vision behind the organization.

I also enjoyed working at the strategic and policy levels. Policy changes the whole environment we work in. Finally, one of the most rewarding things I did was working with the Federal Reserve on the "What Works" book, which attempts rather brazenly to create a paradigm shift within our field.

What's next for you?

I've taken a fellowship at the Urban Institute. LIIF, OFN, and the Urban Institute are collaborating on a project to illuminate how CDFIs are building a focus on equity and social justice into our work. Our goal is to push back on systemic racism and sexism through a community-based lens. We’re asking how we can align with the rights and justice side of the social agenda with community development. A challenge for place-based work is that it inadvertently contribute to segregation and isolation. Breaking this pattern is, in my view, the next challenge for our field. We don’t know where it’s going to go but it’s something I'm passionate about.