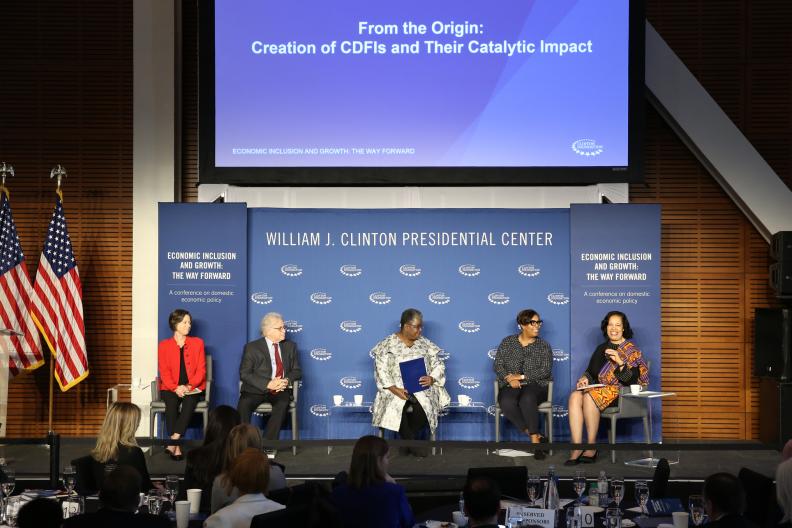 On November 20, community development finance leaders from around the nation convened in Little Rock, Arkansas, at the Clinton Presidential Center for a historic gathering hosted by the Clinton Foundation and entitled “Economic Inclusion and Growth: The Way Forward." This year marks the 25th anniversary of President Bill Clinton’s signing the CDFI Fund into law through the 1994 Riegle Act.

The conference served as an opportunity for industry leaders, including many of the original players who were influential in the creation of the CDFI Fund, to discuss the evolution and successes of CDFIs, proven approaches for urban and rural economic revitalization, supporting entrepreneurs and small businesses, and how to further economic growth in underserved communities.

Darrin Williams, CEO of OFN member Southern Bancorp—an Arkansas-based CDFI that President Clinton helped launch as former Governor of Arkansas—set the tone for the day’s conversations by leading President Clinton and Secretary Hillary Rodham Clinton in a discussion about CDFIs’ tremendous value in creating more inclusive and robust economies around the nation.

President Clinton emphasized the longstanding bipartisan support for CDFIs and how they can be used as a tool for progress in today’s particularly divisive political climate, stating, “There is an enormous opportunity to bridge the partisan divide and do something together.”

Secretary Clinton and President Clinton discussed the ability of philanthropy to play a larger role in creating economic opportunity, with Secretary Clinton stating, “One thing that philanthropy can do that is hard for a lot of corporations to do is to experiment, to create these models.”

“The CDFI field is a force multiplier. It’s more than that first loan, it’s the ability to knit together partners, the ability to see the impossible,” said Mensah, underscoring the far-reaching impact of CDFIs.

The conference continued with engaging discussions led by a powerhouse of experts on inclusive economic development and social impact investing. Dan Letendre, managing director of ESG Capital Deployment at Bank of America, urged investors to support CDFIs with low cost, long term, and/or subordinated capital when structuring deals, while also urging CDFIs to focus more of their investments on environmental justice and sustainability.