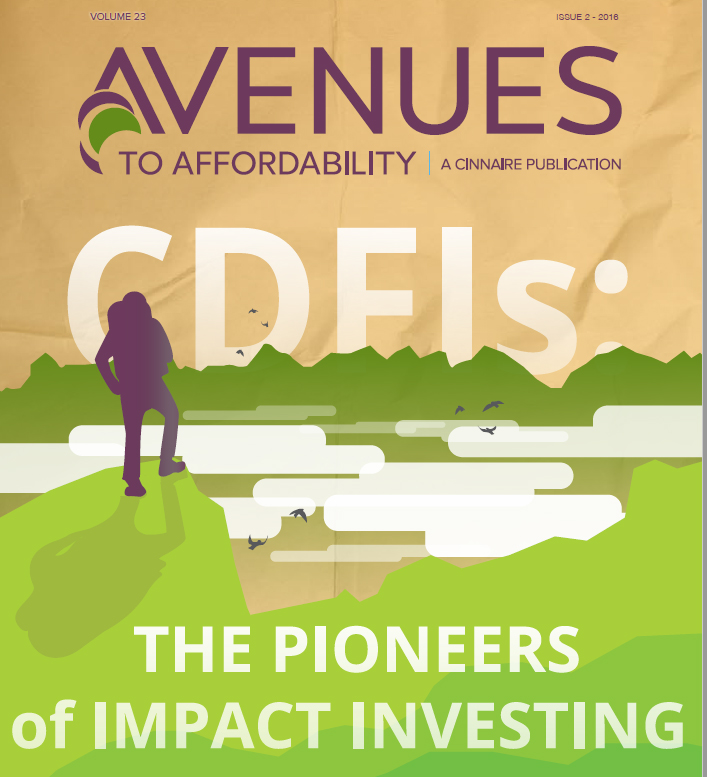 "For 30 years, high-impact CDFI investments have provided people in disinvested and underserved communities with access to responsible, affordable finance. We wanted to find out more about why CDFIs are high-impact, who invests in CDFIs, how transformative change is happening, and what we can expect to see next from some of the opportunity finance industry’s most influential voices." OFN Member Cinnaire recently published a new issue of Avenues to Affordability featuring CDFI industry leaders. Here is an excerpt:

WHAT MAKES CDFIs HIGH-IMPACT INVESTEES?
Mark Pinsky (Former President & CEO, Opportunity Finance Network): CDFIs deliver exceptional “bang for the buck” to investors. While all impact investments can achieve good outcomes, CDFI investments reach the people and places that are hardest to reach with products that are designed to help borrowers succeed. If a carbon-reducing investment makes an impact, a carbon-reducing investment that also increases the financial security and capability of a low-income or low-wealth person is high-impact. The impact of that investment in the future of a person who has been denied equal access historically is simply higher than the impact of other, important investments.

Janie Barrera (President and CEO, Lift-Fund): LiftFund recently completed an Economic Study looking at the high returns in our communities. The purpose of this study was to analyze the economic impacts of the lending activity in Texas and Louisiana from 2010 to 2015. The analysis isolated the impacts on the major metropolitan areas within the states, as well as activity that occurred outside these metropolitan areas. The economic and fiscal impacts were derived only from the new fulltime and part-time jobs created by this lending activity in each year, as reported by the businesses to LiftFund. Over the study time period, LiftFund provided over $104.4 million in loans in Texas, an average of $17.4 million each year, resulting in output of $1.4 billion with revenues to state and local government agencies equal to $66.6 million. Louisiana, LiftFund provided over $10.6 million in loans, resulting in an increase in output of $181.2 million with $8.5 million revenues flowing to state and local governments.

WHO WERE THE INITIAL PRIMARY INVESTORS IN CDFIS? HOW DID FIRST INVESTMENTS COME ABOUT?
Sister Corinne Florek (Executive Director, Religious Communities Investment Fund/Director, Mercy Partnership Fund): Many of the first investors in CDFIs were individuals who had personal wealth and religious groups. Chuck Matthei, who was the major developer of loan funds in the US, spoke to people in homes and churches and reminded folks that those who have resources have an obligation to use them for the good of all. In Catholic theology this is called the common good. Sisters of Mercy in Vermont and New Hampshire were the first investors in those loan funds, and religious women often are the first in new endeavors such as the Solar Energy Loan Fund in Florida. In my congregation, (40 years ago is when we started), we sold some properties and our leadership suggested investing it for future retirement needs. For those working directly with the poor, this was morally unacceptable. Why should we only provide for ourselves when others needed it? After much discussion, we decided to invest the money, but get involved in corporate responsibility issues to challenge the unjust practices of the corporations we invested in. We joined the Interfaith Center for Corporate Responsibility and began filing shareholder resolutions, which we still do to this day.

We wanted to have direct impact, so we used some money to invest in projects in low-income communities. At that time we used the words “alternative investing” to describe it, since it was an alternative to the stock market. The name evolved into community development investing, which I still prefer. The money is targeted to projects in low-income communities. We chose a loan vehicle because we needed the money paid back, but interest rates were very low and below market. When we began only one loan fund existed, the Cooperative Fund of New England. We began with credit unions and CDCs and some nonprofits. Currently, there are so many options you can even diversify a portfolio of these investments.

Ronald Phillips (President & CEO, CEI): The CDFI Fund played a critical role and CEI was among the first groups funded. Prior to and during the early years, CEI was well on its way as a major Maine community development and financial institution. Major foundations such as Ford, MacArthur, Kellogg, Surdna, Calvert and Heron, along with national religious organizations, federal SBA, USDA and OCS agencies, and banks were engaged in capitalizing CEI’s investment pools to finance micro, small and medium enterprises, natural resource industries of farms, fish and forests, community facilities such as child care, and affordable housing. The CDFI Fund offered the necessary core funding and equity capital that strengthened CEI’s balance sheet to leverage low-cost capital from a variety of sources for investment in high impact projects. We cannot continue to grow to benefit undeserved rural and urban people and places cut off from economic and equal opportunity without continuous and increasing equity capital for operations and investment without the CDFI Fund.

WHAT WAS THE ROLE OF CRA IN THE EARLY DAYS?
Bill Bynum (CEO, Hope Enterprise Corporation/Hope Credit Union/Hope Policy Institute): Congress established the Community Reinvestment Act (CRA) in response to redlining—the practice where banks would deny credit, particularly mortgages, to residents of neighborhoods with high concentrations of minorities. CRA specifically required banks to “help meet the credit needs of the local communities where they were chartered.” CRA created an examination and enforcement mechanism for regulators to ensure that banks would provide loans, investments and services (branches) in low- and moderate- income areas that had been historically overlooked. Despite the enactment of several regulatory and a few statutory revisions over time, CRA is in desperate need of modernization. The banking environment has changed dramatically over the last 40 years. For example, because bank assessment areas for regulatory purposes are predicated on the presence of branches, many poor rural communities remain out CRA’s reach. As branches in rural and low-income areas close, far fewer large banks are evaluated on the level of lending, investment and service provision to these communities than when the Act was first implemented.

Janie Barrera: The Role of CRA in the early years is the same as it is today—to level the financial playing field for the unbanked and under banked. This can be accomplished where banks partnering with CDFIs to prepare the unbanked and under banked to move into the traditional financial institutions. Between 2009 and 2013 more than 1,800 bank branches shut down nationwide—93 percent of them in low-income neighborhoods (Bloomberg, 2014). Overall, more than 68 million Americans live in “bank deserts”—communities with one bank or fewer. This lack of access causes high transaction costs for basic financial services as alternative financial service providers (AFSP) fill the gap. For a variety of reasons, it is found that minoritiesare s ignificantly more likely to live in a bank desert, with size effects that are economically meaningful. A study in 2008 by DeYoung shows that the distance between small business borrowers and their lenders have substantially increased. This increase was disproportionately large for borrowers located in low-income and minority neighborhoods. This has led to more barriers for small-businesses accessing healthy capital. Additionally, the lack of depository institutions creates an environment where residents pay higher prices for lower-quality products.

OFN’S LONGITUDINAL STUDY SHOW BANKS ARE THE PRIMARY INVESTORS IN CDFIs TODAY. WHO ELSE?
Mark Pinsky: OFN’s groundbreaking longitudinal study of 20 years of CDFI data—the first analysis of its kind—found that bank lending to CDFIs grew much faster than any other source of
debt. The timing suggests that the federal Community Reinvestment Act (CRA) had a lot to do with spurring that investment because the CRA changes in 1995 made it easier for banks to lend
to CDFIs. Other types and sources of investors continued to grow during the same period, but not as fast as banks. Faithbased investors grew steadily. Foundation investments increased. Government support—at the federal, state, and local levels—rose. Individual lending to CDFIs expanded. Non-bank corporations also got into the game. The question now is where the growth in support will come from over the next 20 years. CDFIs are working hard to diversify their sources. The CDFI Bond Guarantee program is bringing hundreds of millions of new dollars into
the industry from the Federal Financing Bank, a new source. It has the potential to bring in billions more. We are working to make that happen.

Read the full article, as well as other articles in the issue that explore the connection between CDFIs and high-impact investing. This is the second in a series of  Avenues to Affordability publications focusing on CDFIs. To subscribe contact Mary McDaniel.