An Inside Look at OFNs Interns: Part 3 of 3 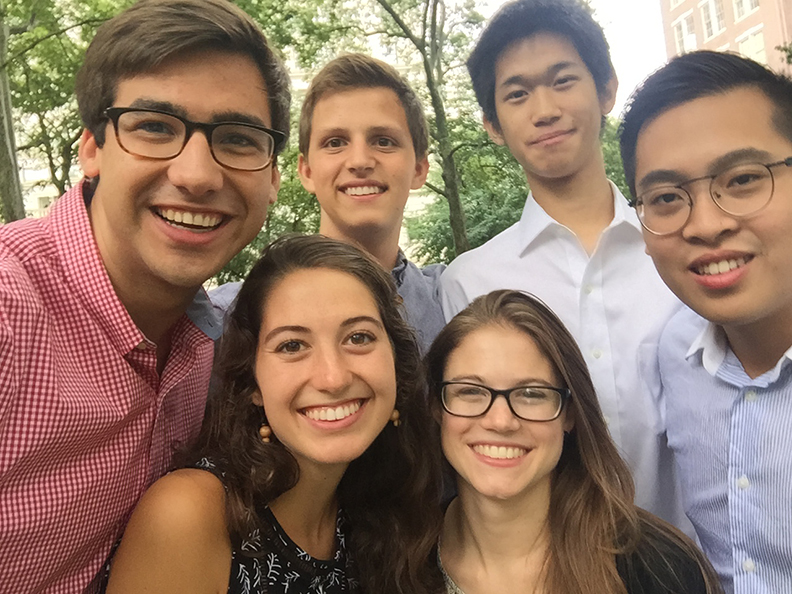 Our interns will soon end their time at OFN, and have made contributions across all lines of business. Earlier we heard from two groups of interns about their time. To wrap up our intern interviews, we hear from York Wang who interned with us in Knowledge Sharing, and Aaron Sutarto who is working in OFN’s Financial Services department. Meet our other interns here and here.

York Wang is a rising sophomore studying Economics and Political Science at New York University. Prior to joining OFN, York was already interested in a non-profit industry. He feels that many students are more interested with working in a big name corporation compared to that of the nonprofit world. Hence, York believes that having work experience with a nonprofit lays a solid foundation for anyone who wishes to make a positive impact socially and financially.  Luckily for York, Stern Business School at New York University offers its students a program to work and study at a nonprofit.  Through the program, York found OFN and immediately decided to apply. He believes the work that OFN does has created many positive impacts to the community by improving the access to capitals for those who really needs it.

For York, working in OFN means serving the community. He is currently working in OFN as a Knowledge Sharing intern and assisting the department in many various ways.  His daily job is to verify and manage the information that is given from the CDFI to their audited report. He also assists in the data research, and publishing aspect of the Side-by-Side report. York is involved in a cross-departmental project with other interns to enhance OFN’s Membership and ally program.  According to him, it is very important that what he does is always high quality, so that the information he presented can be used efficiently by others.

York was born in California from a Taiwanese family. He spent some of his time growing up both in California and Taiwan. During his senior year of high school in Taiwan, York was highly involved with the debate team, track team, and publication team. The biggest life lesson York had during this internship is to listen to the career paths of some of the employees in OFN. He is very motivated and inspired by people’s journey to work in a non-profit.  Although in ten years he would perceive himself working for a for-profit corporation, the OFN values will always be carried with him, wherever he goes.

As a rising pre-junior from Drexel University, Aaron Sutarto is spending 6 months with OFN as part of his 5-year co-op program. Although Philadelphia is drastically different from his hometown of Jakarta, Indonesia, he has enjoyed the change of environment, and the many sights and sounds that Philadelphia has to offer.

He is a finance and accounting major at Drexel University, which comes as no surprise because Aaron has been surrounded by finance his entire life, with many of his immediate family working in banking, corporate finance, and investing. Naturally, his work at OFN is with its Financial Services department, where he spends his days grading loan applications for OFN capital from Member CDFIs.

Although sunny Jakarta is located across the world, there are not too many differences between the two regions, at least according to Aaron. Perhaps the greatest differences are the cooler, less humid weather and the more relaxed social culture of the United States. Regardless, much is the same: The food is good, the people are nice, and there is much to explore.

Outside of school and work, Aaron occasionally dabbles in investing as well as playing sports, usually in games of pick-up soccer here and there. He’s also quite the food enthusiast, always ready to offer great lunch suggestions from Japanese-Jewish fusion ramen to the best cheesesteaks in the city. When prompted about the quality of nearly every restaurant, Aaron’s response remains consistent: “I like it. I like it a lot.”

The time that Aaron’s spent at OFN has proven insightful, showing him the value of nonprofit finance in today’s world. Although having enjoyed working at for-profit institutions in the past, he believes that exposure to the CDFI industry allows for a better understanding of finance as a whole. Although he does much of the same work, the reality is that OFN’s qualitative mission statement gives a reason to do the work. Aaron is thinking of working in the deals industry in the future, but he will always take an effort to help, regardless of where he ends up.