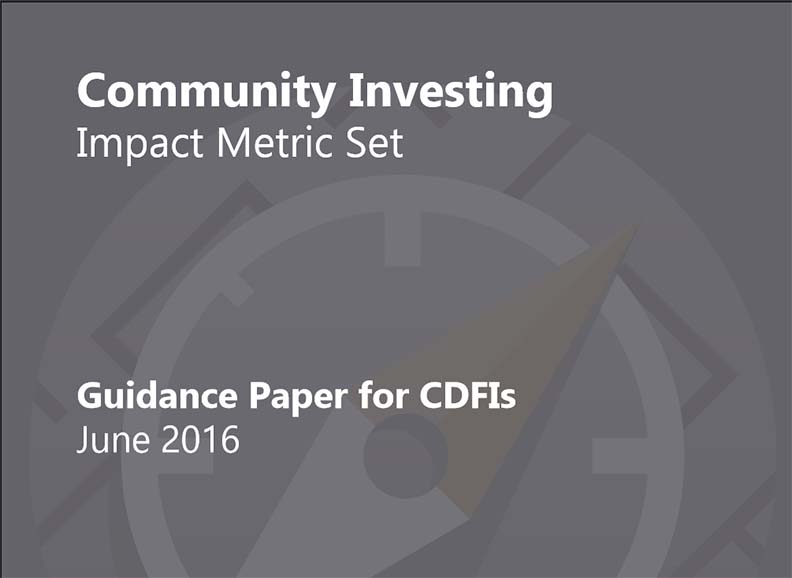 If you work in community development finance, lately you may have sensed growing interest from newcomers to our corner of the financial sector. In particular, socially-motivated individual investors, family offices, pension funds, and others—collectively known as impact investors—are increasingly finding CDFI loan funds to be attractive high-impact, low-risk, moderate-return fixed-income investment opportunities. We at Aeris have witnessed this trend firsthand, as we have been working for more than two years to better connect CDFIs and impact investors, in part by pointing to the availability of third-party ratings and data, akin to those available for mainstream investments.

Through a series of interviews with impact investors in 2015, we sought to learn more about how they think about impact. Our interviews revealed that, while impact investors are driven by anecdotal stories of impact, they also want those stories to be supported by data. We found that impact investors encounter at least two data-related roadblocks to making CDFI investments. First, the language used by CDFIs is often rooted in the community development movement, with government-oriented jargon such as “childcare slots” or “LMI” that often do not resonate with impact investors. Second, these investors tend to be confused by a lack of standardization, which prevents them from understanding impact in an aggregated way.

CDFIs too are eager for more standardized and relevant impact data. At a round table discussion on social impact measurement convened by Partners for the Common Good (PCG), Opportunity Finance Network (OFN), and Aeris at the 2014 OFN Conference, CDFIs expressed a desire to move toward impact data standardization. While recognizing that you can't standardize impact measurement, CDFIs give myriad reasons for wanting more standardized impact data, including a desire for comparability of their impact performance to that of peer institutions and to simplify funder reporting requirements.

In response to what we have learned from investors and CDFIs, over the past year Aeris led an effort to compile a core set of metrics that are 1) commonly reported by CDFIs and 2) applicable to a range of community investments. We worked closely in this effort with CDFIs, community investors, OFN, the CDFI Fund, other large data aggregators, and IRIS staff at the Global Impact Investing Network (the GIIN). I am pleased to report that we reached an important milestone earlier this month, when Aeris and the GIIN published the community investing impact metric set on our websites.

The metric set organizes community impacts into verticals (impact focus areas such as economic security or education) and horizontals (people and places that are the target beneficiaries, such as people of color or rural communities). Organizing impact this way does an important thing: it meets impact investors where they are. It also keeps CDFI impact data out of silos, since any given CDFI loan could potentially fit multiple verticals and horizontals. Of note is that the standardized metrics represent the most commonly reported ones rather than best practices. And since most of the metric definitions also conform to OFN's and the CDFI Fund’s definitions, their use should not add to the administrative burden of CDFIs that employ them.

So what’s next? Later in 2016, Aeris will ask CDFIs in our database to adopt the standardized definitions for the impact metrics they already collect. Since the standardized metric definitions apply only to the most commonly collected metrics, we will encourage CDFIs to continue reporting impact data specific to their organizations and missions.

We believe the new impact metric set represents important groundwork in the longer-term effort to transform the way community investment impacts are quantified. It is our hope that the data standardization made possible by this new metric set will enable better aggregation and comparison of CDFI impact, as investors and CDFIs adopt the new definitions. We look forward to working with CDFIs on the next phase of this project.